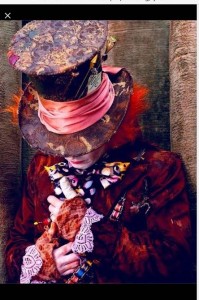 Whilst it is halloween and all sorts of scary images and various make up artists are showing off their talents are trending on social media, I wanted to join in. However not of my own work but that of Colleen Atwood,  award winning costume designer of fictious character Tarrank Hightopp in Tim Burtons adaptation of Lewis Carols novel ‘Alice’s Adventures In wonderland because of his oh so fabulous top hat and his scary nature!

This actually seems quite fitting in more ways than one and I have thoroughly enjoyed exploring the characters origin. Funnily enough though he is never actually addressed as The Mad Hatter as we commonly know him as,  in the film or the novel, just Hatter but because of his chacteristics and personality portrayal we are lead to believe he is some what so!  In fact earlier on in the Edawardian era all milliners/hatters tended to be that way inclined due to the substances used in hat making… mainly Mercury. The mercury was used in the stiffening process of hat making but  thankfully over the years it has been watered down so to speak and is no longer used and has not been for quite some time.

Tarrank Hightopps, a very fitting name seeing as he is hardly seen without his iconic accessory which is an absolutely beautiful autumonal tall top hat. The beautiful tones of yellows, golds and oranges which are seen here set off by the satin salmon pink rouched trim are just truly scruptious! Its just brilliant with the oversized hat pins and the 10/6 shillings price tag still on it.. he is a hat maker and he intends to sell his work, if straight off his head then so be it! The warm tones I’m sure are to reflect his inner heart and soul for what might be seen as mad and scary on the outside is not what you find on the inside, never judge a book by its cover springs to mind!

What is a lovely anecdote to his character which is said to have come from Jonny Depp himself is that not only Hatters’ Edwardian inspired clothing and headwear changes colour but so does his skin depending on his emotional state of mind therefore suggesting he is most colourful at his happiest… which is something I can relate to, not with my skin but with my wardrobe most defintiely, and obviously my profession. We shine at our brightest and most happiest whether we are mad or not!

I think Jonny Depp and the  Hatter are somewhat simialr too… something he said!

“‘ Anyone can go by horse or rail, but the absolute best way to travel is by Hat. Have I made a Rhyme!”